We at InDulwich tend to do things at our own pace and if we are on trend it is more by accident than design. I did remember an article in the Guardian declaring edible flowers to be the “summer’s hottest food trend” but it was returning from a summer holiday to discover that nasturtiums had taken over the garden that stirred me to action. They and strawberries had been battling for garden supremacy, snaking across the patio, enveloping a bench and surrounding pots. The strawberries had put up a valiant fight but the vibrant flowers and lily pad leaves of the nasturtiums had been victorious. I knew the flowers were edible but a friend remarked that the leaves were too and the die was cast. It was time to fight back and in fashionable style. 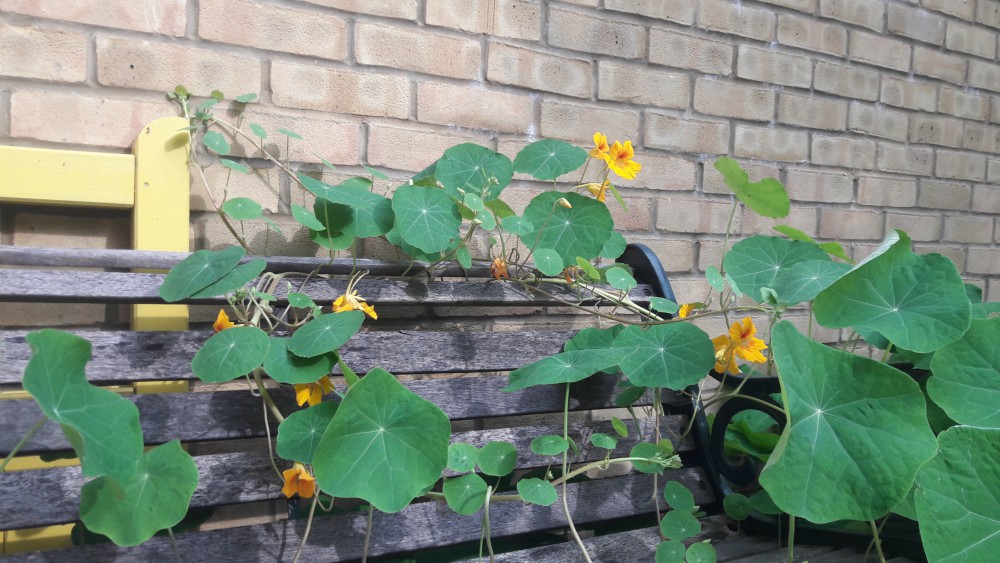 Our nasturtium flowers are a bright yellow with smudges on red on the inside, though the odd one is an exciting red or orange. The taste offers a soft but still pronounced sweetness, followed by an unexpectedly hot pepperiness, with a wrap of something that tells you it’s a flower. The leaves are a little less sweet but still pack a decent pepper punch.

I take a packed lunch to the office, usually including a salad made with whatever is in the fridge. The one in the picture is golden beetroot (a current favourite), yellow pepper, cucumber and nasturtium flowers and leaves.

I pick a few flowers and leaves each morning but there is so much new growth, that I haven’t made much of a dent in the nasturtium tide. The flowers look too lovely to do anything with but pop them in my mouth but what more could I do with the leaves?

The obvious thing was to try them as a spinach substitute, just steamed. This was not a great success and yielded a couple of surprises. The first was the strong smell, as the oils are released. Apart from a slightly unpleasant aroma hanging around the kitchen for a while, that wasn’t important. The other surprise concerned the flavour. Sweet and peppery had turned to bitter. I‘m not averse to a bitter edge to flavours but this reminded me of a hideously bitter tea substitute I’d bought in communist-era Poland. The nasturtium leaves weren’t as strong as that but they did make a poor spinach replacement.

For a second experiment, I fried some onion and garlic and then threw in the leaves. I decided to cook them for a little longer than the faux-spinach, so put in a little liquid – just water – and covered the pan. This was much better. The sweetness of the onion offset the bitterness, which seemed less anyway, presumably from cooking them longer.

A photographer friend once told me that food is the hardest thing to photograph, so apologies of my effort isn’t up to scratch. Anyway, nasturtiums are the gift that keeps on going and I’ll be munching on them for a while yet. If anyone has any suggestions of other ways to cook the leaves, I’d love to hear them.