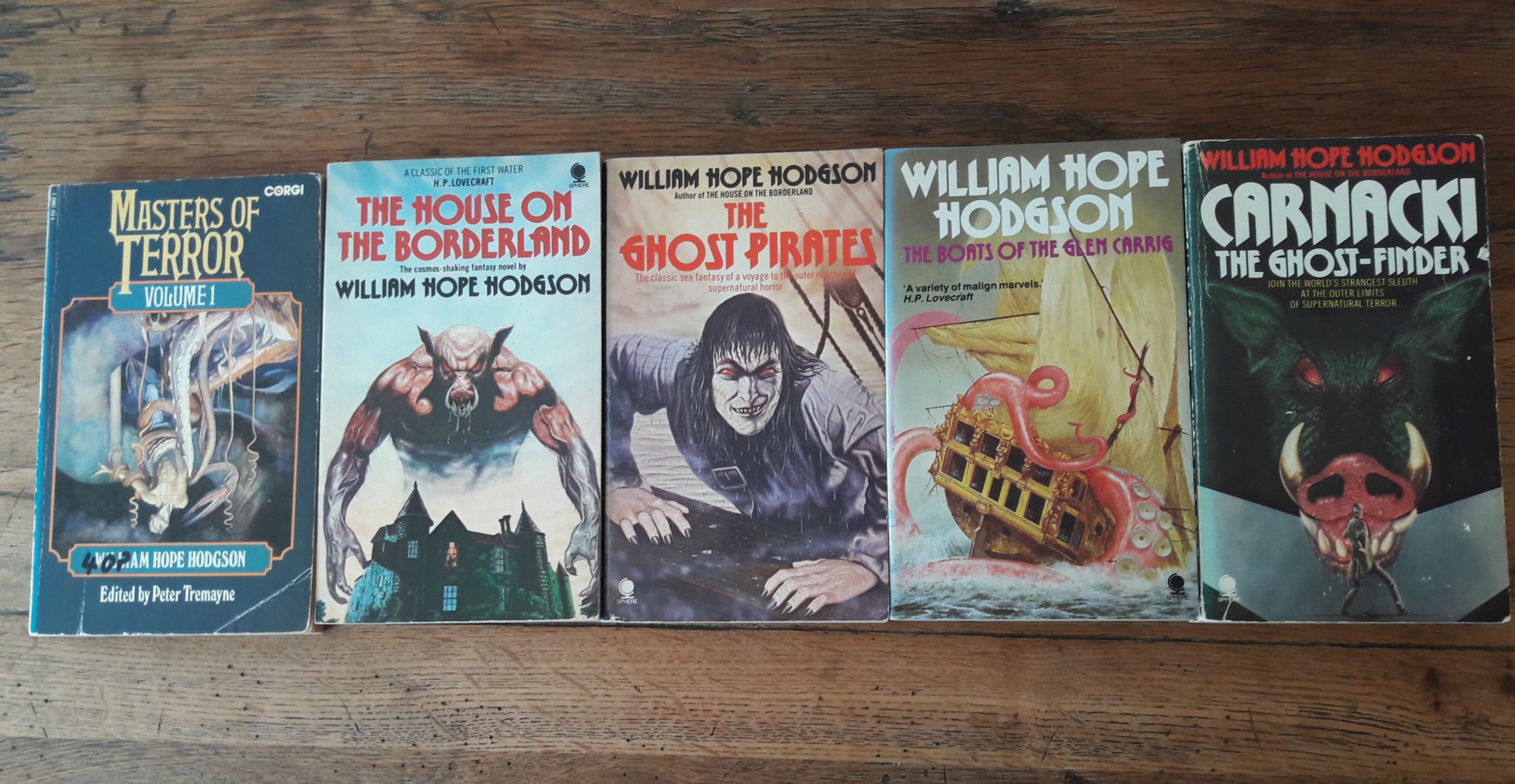 Among the many casualties in World War One was Lieutenant William Hope Hodgson, writer of weird and horror fiction, seaman, pioneering photographer, binder of Houdini and teacher of physical culture to the Blackburn police. On 19 April 1918, forty year old Lieutenant Hodgson was killed in an artillery bombardment near Ypres.

In 1913, he had married Bessie Farnworth and the couple lived in France until the outbreak of war. Back in England and despite being in his late thirties, Hodgson volunteered to join the Royal Artillery. He was invalided out with a broken jaw in 1916 after being thrown from a horse but when he had recovered he insisted on being reinstated.

Early in 1918 he wrote to his mother; “The sun was pretty low as I came back, and far off across that desolation, here and there they showed - just formless, squarish, cornerless masses erected by man against the infernal Storm that sweeps for ever, night and day, day and night, across that most atrocious Plain of Destruction. My God! talk about a Lost World – talk about the end of the World; talk about The Night Land – it is all here, not more than two hundred odd miles from where you sit infinitely remote. And the infinite, monstrous, dreadful pathos of the things one sees - the great shell-hole with over thirty crosses sticking in it; some just up out of the water - and the dead below them, submerged …. If I live and come somehow out of this (and certainly, please God, I shall and hope to), what a book I shall write if my old ability with the pen has not forsaken me.”

He never had the opportunity to write that book. After his death, he slipped into obscurity, unlike contemporaries like MR James and HP Lovecraft. He always had his supporters, like Lovecraft who ranked him as “perhaps second only to Algernon Blackwood in his serious treatment of unreality” and August Derleth, the founder of Arkham House publishing.

Hodgson’s oeuvre ranges from straight up horror to cosmic weirdness. Some of it is cosy, some is brutal and some mind-bending. Along with monsters and ghosts, Hodgson’s stories brim with ideas about astral projection, the origins of life, dimensional rifts and deep time.

For many devotees, The Night Land is his magnum opus. It is set on a ruined earth, far in the future. It is a mighty work, full of ideas but thanks to its cod-archaic style, it’s also a slog. Some love it, some hate it. Either way, it’s not the place to start if you haven’t read any of his works.

The House on the Borderland is wilder but more accessible. The narrator describes out of body experiences, drifting over vast plains, across voids of space and through time to the death of the sun. This is coupled with the earthier siege of his house by hordes of swine creatures.

Another strand of Hodgson’s fiction is the Carnacki stories. Carnacki is a ghost finder, somewhat indebted to Sherlock Holmes and Blackwood’s John Silence. He is Hodgson’s best-realised character; methodical, sceptical but open minded and constantly wrestling with fear.

Carnacki investigates all manner of hauntings, deploying high-tech gadgets like an electric pentacle and wall microphones, alongside the more usual garlic and arcane rituals. He is so thorough that he sometimes spends several weeks minutely examining the haunted building before tackling the phenomenon itself. Some of the stories are deliciously grotesque, like The Whistling Room and The Gateway of the Monster, and it’s no wonder Carnacki is almost overcome with funk.

My favourites are his sea stories; two novels and a boat load of short stories. These are tales of mystery and imagination and the best of them have an insidious power. His protagonists are becalmed, ensnared in the weed of the Sargasso Sea or shipwrecked on bizarre islands. They face all sorts of slithering, biting sea creatures, weird moulds and slicks of scum, drifting derelicts and uncharted lands.

The Ghost Pirates is the better of the novels and shows Hodgson’s weaknesses as well as his strengths. His dialogue can be pretty rum (“Rot! You know jolly well you were sleeping in your time-keeping. You dreamed something and woke up suddenly. You were off your chump”) and the officers and crew could easily be swapped with those in his other stories.

When Hodgson gets into his stride though, he’s superb. A crewman has disappeared somewhere in the rigging and a search is undertaken, lit by lamps and flares. The tension builds and holds as the men fight panic and shadowy figures tracking them.

The Voice in the Night is probably his best known sea story. A becalmed schooner, far from land, is hailed by an inhuman voice, asking for food. The voice’s owner has a grotesque and tragic story to tell. The path the story treads is fairly well worn, dating back at least to Lucian of Samosata but Hodgson does it well.

The story was filmed brilliantly for US television in the late 50s, making great use of atmospheric and claustrophobic sets and a terrific cast of James Donald and Barbara Rush, ably supported by Patrick Macnee and James Coburn. Also worth a look is a luridly 60s Japanese version called Matango, directed by Ishirô Honda of Godzilla fame. It makes a good companion to Hammer’s delirious The Lost Continent and counts Guillermo del Toro among its fans.

Hodgson isn’t much filmed. Apart from these, there have only been a couple of Carnacki adaptations, with Alan Napier and Donald Pleasance in the title role.

The sea stories smack of authenticity and it’s no surprise to learn that Hodgson spent eight years at sea. He describes the monotony of life on board, the watches and the work in a natural way. When Hodgson’s father died, his education was cut short and a couple of months before his fourteenth birthday, he signed on as cabin boy on an oceangoing windjammer. This life was “comfortless, weariful and thankless” and he suffered under a brutal second mate. He made the young Hodgson’s life so miserable that in the end he fought back and ended up receiving a merciless thrashing. He likened it to a fight between a mastiff and a terrier.

His response was to learn judo, build muscle and eventually earn a Third Mate certificate. He also heroically rescued a man from shark-infested waters and was awarded a medal by the Royal Humane Society.

The Hodgson family had always been cash-strapped. His father was a clergyman and moved parish frequently. The mill town of Blackburn was the final posting. While at sea, he had also taught himself photography and when he settled back in Blackburn in 1902, this formed one strand of a rather modern-sounding portfolio career. He combined it with running a physical culture practice, with the police as his main customer and writing.

In October of that year, Harry Houdini appeared at Blackburn Palace Theatre, offering £25 to anyone who could bind him so that he couldn’t escape. Hodgson took up the challenge and met Houdini on stage with “an armoury of cuffs and irons” as the Blackburn Standard had it. Houdini protested that the locks had been wrapped with twine, which was against the spirit of the challenge but eventually relented. Hodgson used his knowledge of muscle action and soon the escapologist was “for all the world like a trussed fowl”.

Houdini did escape but it took so long that the audience had grown restive and then angry but not with Houdini. Panting and weak, he addressed the cheering crowd; “Ladies and gentlemen, I have been in the handcuff business for fourteen years but never have I been so brutally and cruelly ill treated. I would just like to say that the locks have been plugged”.

By then, Hodgson had disappeared to the police station, fearing retribution. After his experience at sea, it must have felt strange to be the one labelled brutal.